OOOOOOOOOOH… LOVE TO LOVE YOU, BABY! 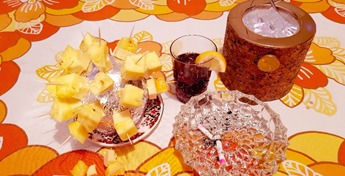 “Like a little Bacardi to go with it, Tone?”

Mike Leigh’s classic 1977 suburban satire was voted 66th in The National Theatre poll of the best 100 plays of the 20th Century. Praised as a period piece with hilarious one-liners and the music of Donna Summer, Demis Roussos and Jose Feliciano, the play still has issues that are relevant today: Beverly’s bullying brashness, Laurence’s casual racism and sexism, and Tony’s violent, coercive control of Angela. Set in Beverly’s garden, this production shines a light on these issues as well as the aspirations of the emerging middle class in Britain in the late 1970’s.

The play is being responsibly rehearsed and performed due to Covid-19. Bring your socially distanced picnic and enjoy live theatre for the first time since lockdown!

These will be available on the night for your delectation with proceeds to: